Back On The Beach Again

Coastal Maine Foot and Ankle Blog Back On The Beach Again 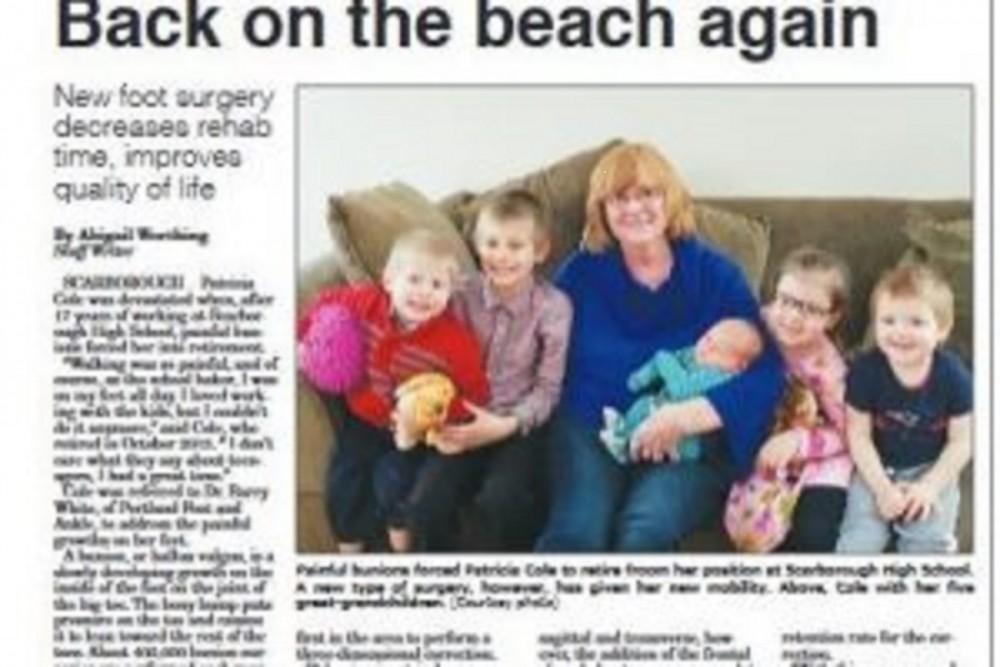 SCARBOROUGH – Patricia Cole was devastated when, after 17 years of working at Scarborough High School, painful bunions forced her into retirement.
“Walking was so painful, and of course, as the school baker, I was on my feet all day. I loved working with the kids, but I couldn’t do it anymore,” said Cole, who retired in October 2015. “ I don’t care what they say about teenagers, I had a great time.”
Cole was referred to Dr. Barry White, of Portland Foot and Ankle, to address the painful growths on her feet.
A bunion, or hallux valgus, is a slowly developing growth on the inside of the foot on the joint of the big toe. The bony bump puts pressure on the toe and causes it to lean toward the rest of the toes. About 400,000 bunion surgeries are performed each year in the United States, and women are nine times more likely to develop bunions than men.

Cole had her first bunion removed in 2017, and her second in late 2018. While her first procedure was successful, it was conducted as a two-dimensional metatarsal osteotomy repair, the standard for the time. Her second procedure performed by Dr. White was a new, innovative approach, as he is one of the first in the area to perform a three-dimensional correction.
“A bunion is a tri-plane deformity, so for a successful correction you need to dial in your approach to ensure that it is resolved,” White said. “Bunions aren’t just a bump, it’s a growth on the first metatarsal. A two-dimensional approach cuts off the bump without addressing the unstable joint.”
The new approach performed by White addresses all three planes of the defect; the sagittal, transverse, and frontal. The older procedure focused on only sagittal and transverse, however, the addition of the frontal plane helps to ensure a complete correction.
“The two-dimensional approach is very helpful, but it doesn’t address the defect completely, and can cause the bunion to recur in as much as 70 percent of cases,” White said.

White cited a study presented during the American Orthopedic Foot and Ankle Society annual meeting in Boston of July 2018 during which this procedure was projected to have a 97 percent retention rate for the correction.
“With this new approach, the correction is definitive, addressing the issue on all three planes to give our patients a very low risk of recurrence,” White said.
For Cole, the two experiences could not be more different.
“The first surgery went really well, but I was in a cast for a month, and then had to use a knee scooter for three months after,” Cole said. “This second time, I never had to even wear a cast.”
For Cole’s recovery, she was put immediately into a boot four days past the operation, used her knee scooter for a week, and then was able to walk in the boot.
“It made a huge difference. The first time, my daughter and grandson had to follow me around and wait on me hand and foot,” said Cole, who has six children, five grandchildren, and five great-grandchildren. “This time, it’s been so much easier to get back to being mobile.”
The emphasis on early mobility is a large component in the success of the new procedure at White’s practice.
“With the old approach, it could take up to six or eight weeks to get our patients up and walking,” White said. “Now we can usually get them up within seven to ten days. We find that the more quickly we can ambulate them, the quicker they can recover.”
White has performed 40 of the procedures in the past year, and is thrilled with the results.
“My experience has been outstanding,” White said. “This is a game-changer for bunions.”
For Cole, she has nothing but glowing things to say about White and his practice.
“They could not have been more warm and friendly. When I came in with my family, the doctor answered every question they had,” Cole said.
When asked what she’s most looking forward to now that she can walk comfortably again, her answer was simple and immediate.
“I’m so looking forward to walking on the beach again,” Cole said. “It’s been three years since I’ve been able to do it, and I can’t wait to go back.”

Staff Writer Abigail Worthing can be reached at news@scarboroughleader.com. 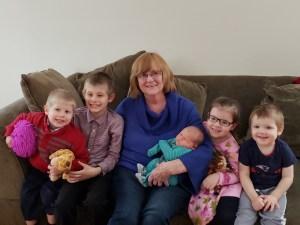 Painful bunions forced Patricia Cole to retire froom her position at Scarborough High School. A new type of surgery, however, has given her new mobility. Above, Cole with her five great-grandchildren. (Courtesy photo)